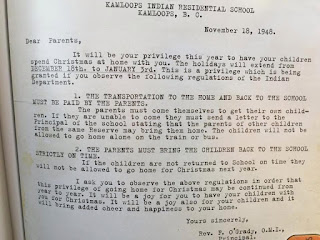 With only four Catholic schools in the nearly 347,000 square kilometers of northern BC, it was clear to Bishop O’Grady from the start that Catholic education was a primary need. He began a recruitment drive and hundreds of young people from around the world, inspired by his vision and enthusiasm, began arriving to help. In four years the number of schools increased to thirteen.

In 1958 the Sisters of Mercy came from Callan, Ireland to staff one of the newly established schools, St. Maria Goretti School in Fort St. James. And in 1960 Prince George College, later known as O’Grady Catholic High School, was built in Prince George.

In accordance with Canon Law Bishop O’Grady submitted his resignation to Pope John Paul II when he reached the mandatory age of retirement in 1983. At 75 years of age he had given 27 years of faithful service to the Diocese of Prince George.  Throughout his retirement Bishop O’Grady remained in Prince George, serving the faith community as a respected elder. As much as he was able he celebrated daily Mass in the Domano Chapel, provided replacement ministry in parishes and was an integral part of diocesan celebrations.

215 children would fill almost seven classrooms. 215 families were never given an opportunity to bury their loved ones with the dignity and care they deserved. 215 precious souls that would be today’s Knowledge Keepers. Parents, educators, artists, nurses, doctors, lawyers, social workers, leaders, all stolen from us.