It was such an important and historic moment for Irish survivors, where the Pope was left in no doubt about the human and spiritual cost that clerical child sexual abuse causes.


“I swore never to be silent whenever and wherever human beings endure suffering and humiliation. We must always take sides. Neutrality helps the oppressor, never the victim. Silence encourages the tormentor, never the tormented.”
Elie Wiesel

It was such an important and historic moment for Irish survivors where the Pope was left in no doubt about the human and spiritual cost that clerical child sexual abuse causes. Those costs over decades were in the form of self-harming to suicide to spiritual isolation and what is called ‘soul murder’. 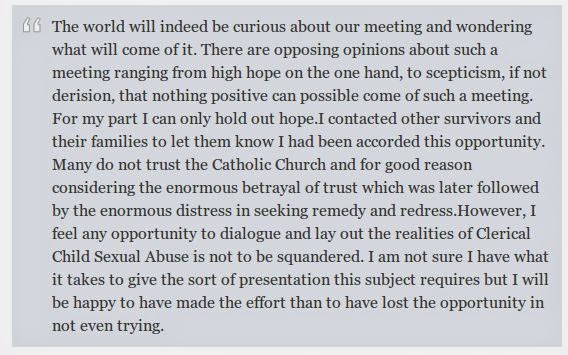 In my letter I personally presented to Pope Francis I wrote: 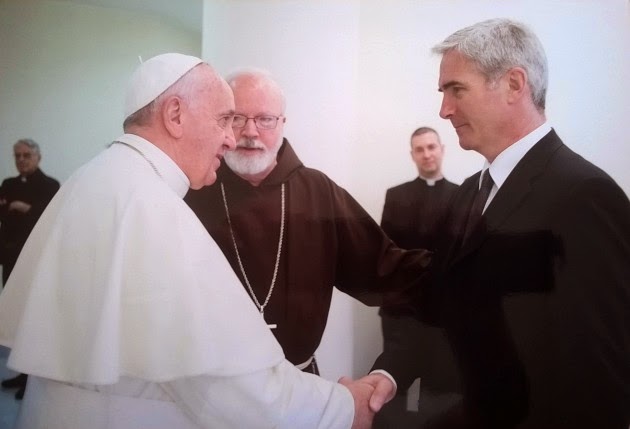 My meeting
I was to have 45 minutes with Pope Francis in a meeting, for which I have Archbishop Diarmuid Martin to thank. It was a minute for each year since I was first abused at the age of 9. Then, I was ordered into a room where I was abused by a priest; now, I was invited into a room to tell another priest all about it, that priest being the Pope himself.
I don’t want to believe the meeting with survivors was any PR exercise. I believe there is a dichotomy at work where the Catholic Church acts as a ‘corporation’ or ‘church’ and responds accordingly. In ‘corporation’ terms any media event is part of a PR exercise. However where the Catholic Church acts as a ‘church’, a ‘family’, ‘the body of Christ’ then this event was and is not a PR exercise but one which recognises the deep suffering caused survivors, their families, their communities, including the human family on a profound human and spiritual level.
I left Pope Francis with a clear translation by Cardinal Sean O’Malley of the following words: “The scandal of clerical child sexual abuse (CCSA) is an existential crisis in God’s house, played out for the world to see. It is about the children of the living God and how they have been treated by the ministers of the living God.”
Mark Vincent Healy is a campaigning abuse survivor. Read his full report and response to the NSBCCCI audit into the Holy Ghost Fathers here.

Read: Pope promises “solutions” to celibacy in the priesthood

Martin: ‘Crisis of the sexual abuse of children in the church not a chapter of the past’