those people "if what you are telling me is correct, there are hundreds of matters that should have been reported over the years, that haven't been reported". Huilende krokodillen "only in Australia" 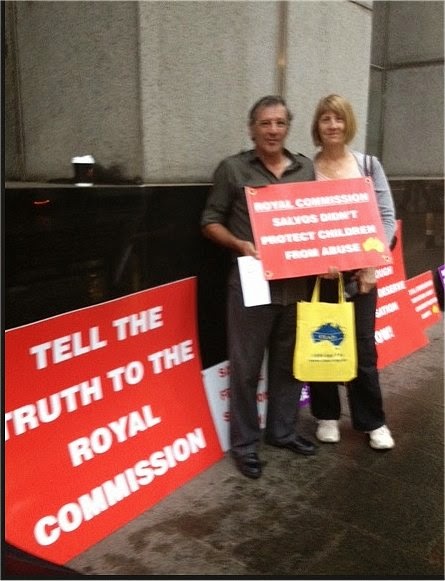 One  of the Salvation Army's top leaders in Australia waited nine months before telling authorities about a known sex abuser, who was also his friend, an inquiry has been told.

Commissioner James Condon delayed reporting Colin Haggar, who was running an army crisis shelter for women and children in 2013, a witness told a royal commission hearing in Sydney.
The commission heard last week that Mr Haggar confessed in 1989 to the mother of an eight-year-old girl that he had sexually assaulted her.

He was dismissed by the army, but re-admitted in 1993 and promoted.

On Friday, the hearing was told that other army officers were concerned about Mr Haggar's continued contact with children and in early 2013 raised the matter with Mr Condon, commander of the army's eastern territory of NSW, Queensland and the ACT.

During this hearing, it has been revealed Mr Condon officiated at Colin and Kerry Haggar's wedding and went with Mr Haggar to police after he admitted assaulting the girl.

Simeon Beckett, counsel for the commission, said no records of that police report could be found.

On Friday, the commission heard it was nine months after concerns were raised with Mr Condon that Mr Haggar was involuntarily retired and demoted from lieutenant colonel to major.
Captain Michelle White, director of the army's Young Hope foster care service, said she was approached in early 2013 by two officers who had concerns about Mr Haggar.
They had told Mr Condon, but nothing had happened. Ms White explained there was a mandatory reporting obligation and followed up the matter with Mr Condon.
She pointed out she had a legal, ethical and moral obligation to report "my knowledge that we have an active Salvation Army officer with a known history of a child related sexual offence."
Ms White then met with Mr Condon who said: "Michelle, if what you are telling me is correct, there are hundreds of matters that should have been reported over the years, that haven't been reported".
He also told her "that couldn't be possible".
Ms White said she understood from Mr Condon it would now be reported, but later learned Salvation Army's obligations to report were being explored.
On August 23, she again wrote to Mr Condon and received a short reply that "this matter has been dealt with".

On September 4, she reported the matter herself to the Ombudsman and the guardian's office.
Ms White said Mr Condon wrote to her saying he wished she had not done it without telling them.
She interpreted it as a rebuke.
Ms White also said that she felt conflicted and was aware of the sensitivities and conflicts around friendships in the army.
In the days prior to the start of this hearing, she received an email on Facebook from Kerry Haggar, with whom she was friends.
Ms Haggar is a lieutenant colonel and on the army's executive committee.
The email said "the chain of events you set in place have caused devastation and incredible pain to many innocent people. In attempting to protect families you have caused irreparable damage to mine."

Ms White said she was upset and could understand Ms Haggar's distress, but thought it inappropriate.

Kate Eastman SC, counsel for the Salvation Army, said Ms Haggar had been stood down on Friday.
The commission also heard she will seek leave to be legally represented at the commission, which resumes on Monday.
Gepost door crispina op 1:20 a.m.